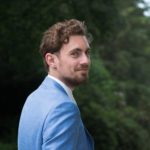 Marise Raaijman from Study Association FUF: “After having received his degree for the Research Master Philosophy in 2015, Robin de Bruijn rolled into a two-year trainee programme at NS (Dutch Railway Company) pretty fast. This was a project directed at developing personal leadership. This was not particularly new to him, having been part of the education committee while studying at the UU, as well as having been student assistent. Robin is currently chief of process, meaning he is responsible for the processes of the NS at the Operational Control Centre Rail. His developed talents and the skills he has acquired during his study in Philosophy have proven fitting for business in an unexpected way.
Would you like to know more about how Robin’s Philosophy Background got him to the Dutch Railway Company? Come find him on February 18th!”